What's It Worth? NEW 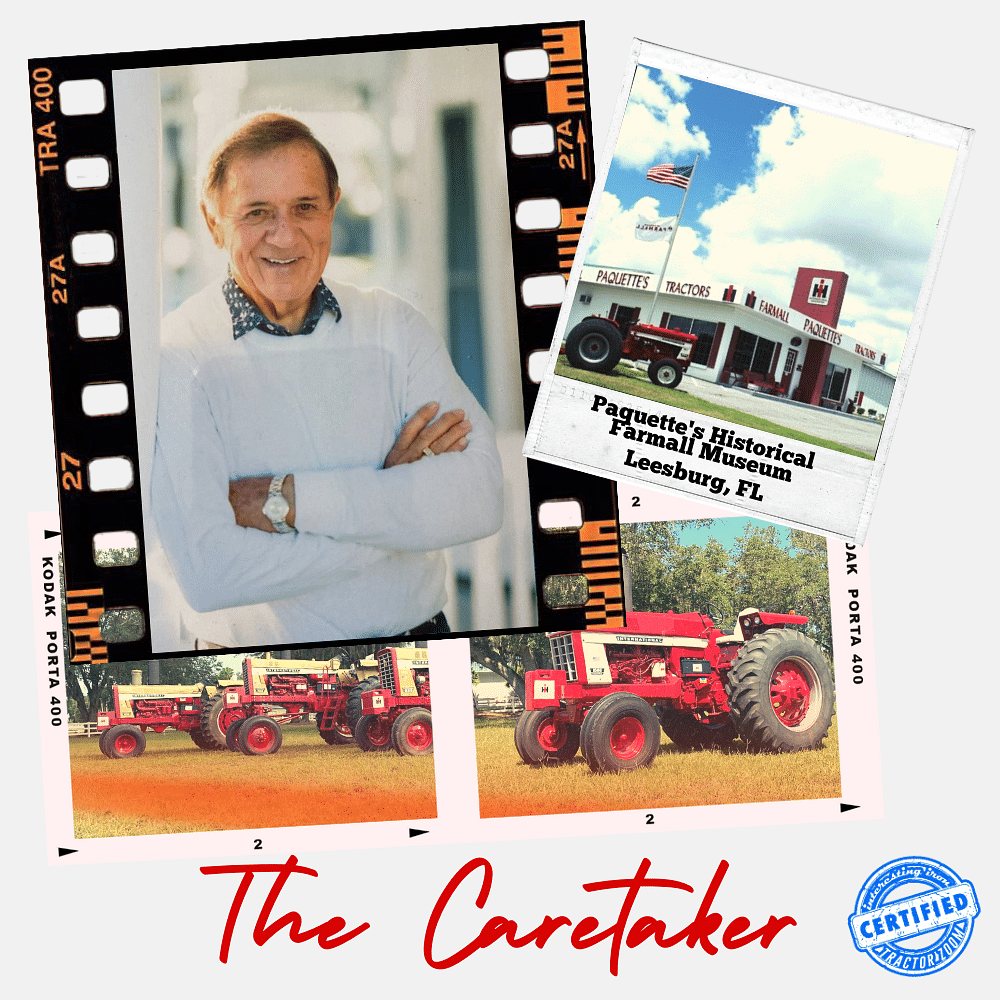 This week’s column is going to be a little different. Today, we’re talking about Stew Paquette and his legendary collection of all things IH down in Florida. As some of you know, Stew passed away about six months ago, and the collection is about to cross the virtual auction block in a series of online sales hosted by the folks at Aumann Auctions.

I’d always heard that Stew’s collection was amazing, but unfortunately I was never able to get down to Florida to see it.

The wild thing about this collection was the breadth of it. I remember hearing Stew say, “We want to collect one of everything Harvester ever made…” in an interview with Brian Baxter for Classic Tractor Fever. And to be honest, he gave it a heck of a run, too. He didn’t collect it all, but he probably came closer than anybody else!

We’ll get into some of that in a bit. But before we do, here’s the link to the six auctions.

Who was Stew Paquette?

Stew Paquette was not your ordinary red collector. He didn’t start collecting until fairly late in life, and he didn’t really have ties to farming, either. Stew lived in New England for half of his life and started a successful paving company in his twenties. He didn’t move down to Florida until 1974. Once he was down there, he started another paving company in central Florida that he owned until 1998.

It wasn’t until 2004 that he bought a tractor (a Farmall 560), at age 66. I think the general intent was to fix it up and use it to maintain his acreage. Then, on a family trip to Vermont, he noticed a collection of red tractors all lined up on some back road near the town of Derby. He fell in love pretty much instantly, and marched up to the door and asked to speak with the owner. The lady who answered the door ltold him, “No, we’re about to sit down to dinner. Come back later.”

So that’s exactly what he did.

The man he talked to was Pinky Provost, and he brought six of those tractors home with him that day. They also became life-long friends.

That was the day Stew Paquette fell down the rabbit hole and became a red collector. By the time he passed, he’d built a collection of over 200 tractors plus all of the other stuff!

Here’s the funny part about those tractors he bought from Pinky; he told the family that he was going to fix ’em up so that his grandkids could drive them around the acreage on visits, and so that they could learn to appreciate America’s farming heritage.

Anybody want to guess how many times the grandkids actually drove them?

The collection was always referred to as “Stew’s Stuff” and if I had to wager a guess, I’d say that Helen (his wife) probably coined the term. Check out some of the machines on the sale – nearly every one of ’em has a “Stew’s Stuff” decal on them (similar to Jerry Mez’s pinstripes on a lot of his tractors). As Stew added stuff, he built several buildings to house it all – one of which is a recreation of a 1940s Farmall dealership. Eventually he began opening the collection to the public (2012, I believe?).

It didn’t take long before the news of a Florida Farmall museum became the talk of red collectors everywhere. Stew’s Stuff became a destination for thousands of vacationers, and Stew was always there to show them around. For him, there was no better way to honor Harvester’s heritage than to see the people – especially kids – walking through those buildings. Furthermore, with Florida being a popular vacation spot, it drew lots of international guests as well. In one interview, I think he said they’d hosted guests from at least a dozen countries!

Stew also hosted tractor shows, rides, and pulls at the facility in Leesburg as well. I’m pretty sure they pulled everything from antiques all the way up to the hot stuff there!

What drove Stew to do this?

Yesterday, I had a really nice conversation with Tia, one of Stew’s four children, and I asked her that question. She told me that for her dad, it was really about four things. The history, the hunt, the travel, and most importantly, the people.

Stew Paquette was a huge history buff. He absorbed history like nobody else. He felt that to know where you were going, you had to appreciate where you’d been. To that end, when he read Barbara Marsh’s book, A Corporate Tragedy – the book that details the agonizing downfall of IH, he set out to preserve as much of the history of the company as he could. Whether it was nuts and bolts, tractors, refrigerators, or anything else that was ever stamped with a Harvester logo, he wanted to own one. He wanted to keep that history alive so that people – especially kids – could understand how IH changed the face of this great country we live in.

(BTW, if you’ve never read that book and you’re a IHC fan, you’d best get on that link quickly. The original is long out of print, and Super Scout Specialists is the only place that has reprints available. It’s $40 well spent.)

Talk to any collector – it doesn’t really matter what they collect. Most of ’em will tell you that the thing they enjoy most is the hunt. It doesn’t matter if it’s tractors or coins or old fountain pens, the fun part of the hobby is finding them. There’s actual science behind this, too – chemicals in our bodies are released with the anticipation of discovering something we’ve searched for. At the end of the day, for Stew Paquette, finding a rare tractor gave him the same adrenaline rush that a skydiver gets when they jump out of a perfectly good airplane!

According to Tia, Stew was a serial collector, too. He had all sorts of collections – Civil War muskets, coins, ’55-57 Chevys, you name it. Stew had an affinity for old stuff.

Stew loved to explore the world. He never let the grass grow under his feet. He loved to go on tractor rides, attend shows, tour collections, and see the country. It was a part of collecting that he really enjoyed, because it meant that he could absorb more of Harvester’s history with other collectors!

It’s been said that Stew Paquette never met a stranger, and I believe that. As best as I can tell, he was about as much of a social butterfly as I am. He loved meeting people and sharing his passion just like I do.

I know a handful of people who have made the trip down to Leesburg to Stew’s museum, and every one of them tells the same basic story. They all say that the collection was really cool, but that getting to meet Stew was the real treat.

This is a phenomenon that I’ve written about before – ironically, when I wrote about it the last time, it was with another red guy – Jerry Mez. I’m convinced that Jerry & Stew were twin sons of different mothers; they both had the same electric personalities – and was the passion for International Harvester that drove them.

“Stew’s Posse” as Kurt Aumann has referred to it, kind of goes hand in hand with Stew’s love of people. When the museum was open, it got a lot of repeat visitors from all over the country! Many were snowbird collector-types who went south to escape the cold weather. A handful of those guys got to know Stew pretty well and ended up becoming part time volunteers. They were all there because volunteering there meant that they got to spend time with their friend Stew Paquette and share that passion on a daily basis. Not a bad way to spend a winter, as far as I’m concerned!

The wildest thing about Stew’s Stuff is just how wide it is. He had one of the biggest collections of IH machinery, signage, and memorabilia out there. From the oldest known Farmall to a replica Cub Cadet dealership, he had just about everything! Here’s a few photos – each one is linked to Aumann’s listing. (All photos from Aumann Auctions.)

So, like I said…lots of cool stuff on this sale. We’ve barely scratched the surface!

Every time a collection like this goes up for auction, inevitably there’ll be a bunch of people throw shade on the sale. They’ll say things like, “It’s a shame that this collection is being split up and sold at a profit; it should stay together so that the heritage can be preserved…” or something similar.

Every time I see comments like this, I have to bite my tongue.

But…since this is my column and my opinion, I want to present a different perspective. At the end of the day, this is a pretty complex and heavy topic, and there’s a lot that people aren’t considering when they make a comment like that.

At the end of the day, none of us lives forever. We’re really just caretakers for the stuff that we accumulate. In Stew’s case, his kids had a decision to make. It wasn’t one that they took lightly, either. Keep the museum open, or send it off to new owners?

Ultimately, though it was emotional, it was pretty easy. The museum needed to close, and the tractors had to go. (And yes, I know that sounds very callous on the surface. Stick with me, because it isn’t.)

Why close the museum?

As Tia very eloquently explained to me last night, “We love the tractors because of who they represent, not what they represent. Those tractors were what he loved; we love them because they remind us of him.”

See, Tia and her three siblings are all in their fifties (or getting close). They all have businesses to run, kids and grandkids to look after, as well as their own passions. For them to attempt to keep the museum open would be an exercise in futility. Furthermore, it would do a tremendous disservice to their father. “We don’t know the tractors like he did, and we don’t have the passion for it like Dad did,” Tia said, “To try and keep the museum going just because ‘it’s Stew Paquette’s’ wouldn’t be fair to us OR our father OR any visitors, for that matter!”

She’s right, too. It’s not a ‘fake it ’til you make it’ kind of deal. The thing that made that museum successful in the first place was the passion of the guy who started it. If you take that out of the equation, all you’re left with is a bunch of neat tractors and trucks and implements.

Why sell the stuff?

Tia explained this really well, too. “We want those tractors and trucks and all of Dad’s stuff to go to new homes where it will be appreciated by a new generation of collectors,” she said, “and nothing will make us happier than to know that they’ll continue to make people happy like they did for our father.”

Furthermore, as fans of old iron, if we want this hobby to live into the future, it means that collections like this have to break up at some point. Honestly, for as much nice stuff as there is on this sale, there’s a lot of stuff that’ll probably go pretty reasonably, too. Those tractors and trucks and implements can all end up going home with new collectors. That should excite us, not make us sad!

So if it were your choice, what would YOU bring home from Stew Paquette? Send me an email and let me know! Let’s talk tractors!